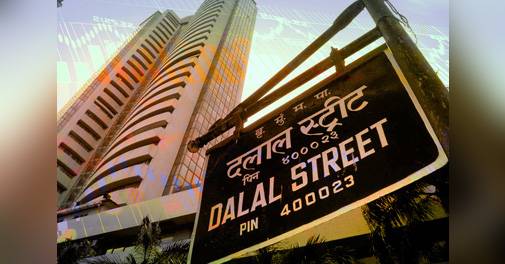 Markets traded marginally higher today as investors turned cautious following muted domestic macro-economic data. The decline in the Index of Industrial Production (IIP) stood at 10.8 per cent in July. Contraction in August stood at 8 per cent. India’s CPI edged higher to 7.34% in September against 6.69% in August, as per the latest data.

UltraTech Cement, followed by Bharti Airtel, Asian Paints, Titan, ITC, Kotak Bank and L&T were among the top gainers on Sensex. On the other hand, ICICI Bank, IndusInd Bank, SBI, Axis Bank and Bajaj Finserv were among the laggards. On the sectoral front, barring IT and metal, all the other sectors were trading bearish today, with PSU Bank and media index dropping 1.2% each.

On the currency front, Indian rupee fell by 7 paise and settled at 73.35 per US dollar on Tuesday tracking muted domestic equities and strengthening American currency. On Monday, Indian Rupee snapped its three-session winning run and ended at 73.28, down 12 paise against its previous close of 73.16.

Asian markets were mixed today post release of Chinese trade data and as trading in Hong Kong was suspended due to Typhoon Nangka.

US markets closed sharply higher backed by technology stocks. Possibility of Congress managing to provide Additional stimulus in the US also kept equities bouyed. US Presidential debate and upcoming earnings will also have a say this week.

European markets closed mixed although traders were optimistic on strong Chinese data and on US stimulus talks.

Sameet Chavan (Chief Analyst-Technical and Derivatives, Angel Broking said,” As far as levels are concerned, 11867-11800 should be treated as a support zone; whereas on the higher side, 12000-12050 are the levels to watch out for.”

Ajit Mishra, VP – Research, Religare Broking said,”We feel its a healthy pause and suggest using further dip to create fresh longs in the index. Nifty has immediate support at 11,800. Stocks, on the other hand, are witnessing erratic swings but its not new during the earnings season. Traders should plan their trades accordingly and prefer large-cap over others.

On markets closing –Manish Hathiramani, proprietary index trader and technical analyst, Deen Dayal Investments said,”The Index closed in the same flat manner in which it opened this morning. The markets moved in a tight 100 point range between 11880-11980. 11800 is a good support for the Nifty and 12000-12050 is the short term resistance. When we get past those levels, we should be moving towards 12200-12300 levels.”

Worldwide, there were 380 lakh confirmed cases and 10.85 lakh deaths from COVID-19 outbreak. India’s COVID-19 caseload breached the 71-lakh mark and the death toll from COVID-19 infections rose to 10.9 lakh, as of today.