India has a job discovery problem, and solving it is crucial

Among the many issues plaguing micro, small and medium enterprises (MSMEs) in the wake of the coronavirus crisis, hiring is a big one, mostly ...

Among the many issues plaguing micro, small and medium enterprises (MSMEs) in the wake of the coronavirus crisis, hiring is a big one, mostly because MSMEs cannot afford to advertise available jobs on a personal website or a portal like multinational corporations (MNCs) do. This has led to a situation where, even if there are jobs and job seekers available, there’s an artificial dearth created because of missing pieces of information, says Geeta Goel, Country Director at Michael and Susan Dell Foundation India.

Over 5 million salaried Indians have lost their jobs over the last six months since COVID-19 gripped the country, and, according to research reports, more cuts could be on the way as the economy moves into a deeper slowdown.

With migrant workers leaving the cities to return home, MSMEs and other sectors of the economy have lost their essential blue and grey collar workforce – so there is demand. But because most traditional job portals don’t go so far down the value chain, these job openings are invisible.

That is one of the problems the Michael and Susan Dell Foundation (MSDF) India hopes to solve – a lack of visibility of jobs, especially for blue- and grey-collar workers.

#JobsForAll: This woman entrepreneur is helping more than 20,000 migrants upskill themselves and find jobs amid COVID-19

“We’ve created our India strategy around livelihood platforms, and we’ve realised that technology has been a significant enabler in the space,” Geeta tells YourStory Founder and CEO, Shradha Sharma.

Through MSDF, Geeta has been investing in startups that address India’s jobs and employment opportunities. She looks for solutions that not only put the country’s low income and marginalised communities to work, but also those that help with skilling and upskilling for available opportunities, match skilled workers with appropriate jobs, and also make jobs available to the gig economy’s favorite produce – freelancers.

And her work is more important now than ever given the many layoffs which threaten to push the country’s economically disadvantaged communities even deeper into poverty.

Employment opportunities due to COVID-19

Even though the pandemic claimed over 5 million jobs, demand for personnel in sectors such as healthcare, logistics, and last-mile delivery saw a spike.

Nimish Sharma, CEO and Co-founder of Workex, a job search portal that helps reduce recruitment time, says he saw BPO workers, salespersons, and business developers, among others, migrate towards jobs in the healthcare and logistics sectors over the last couple of months.

“Job openings for healthcare workers to be hired as pharmacists, bio-chemists and chemists even came from tier II cities like Nagpur, Bhopal and Vizag, apart from tier I cities,” he says.

With data plans getting increasingly cheaper, job seekers from all walks of life have been using the internet to search for work – and that has allowed the informal sector to become a part of the mainstream economy.

The biggest advantage of this formalisation has been that there’s more transparency on the salaries MSMEs pay. It’s also easier now for applicants to judge whether they fit a role, or if they need to upskill, because MSMEs have to specify the skill sets they’re looking for in prospective employees.

Workex over the last six months has seen half a million candidates searching for jobs on its platform. 30,000 employers have posted around 200,000 job ads, and the platform has helped fill over 20 per cent of those empty seats, says Nimish.

From the dark, untold side of entrepreneurship to building a multinational edtech startup: what’s in store at TechSparks 2020

Changing hiring trends due to the pandemic

Awign, a work-fulfillment partner that works with employers and gig workers, has noticed some surprising changes in hiring trends due to COVID-19.

Earlier, the startup – one of MSDF’s portfolio companies – used to see more demand for gig workers from growth-stage companies which usually hired people on a task-basis.

But now, more and more enterprises and MNCs are signing up on Awign and setting up complex tasks that they earlier would have hired permanent employees for.

Annanya Sarthak, Co-founder of Awign says, “Enterprises today don’t want to hire people and then go through layoffs in the future – they want a solution in which gig workers come in to execute core complex tasks for them.”

When Awign gets a complex task from an enterprise, it breaks it down into smaller tasks and assigns them to its network of 500,000 gig workers. The company also helps freelancers pick tasks that match their skill sets, and facilitates upskilling and training when needed.

One of the more important things it does is ensure that payments happen on time. Over the last couple of months, Awign noticed that gig workers’ payments were getting delayed and, as a result, its Google Playstore rating kept falling. 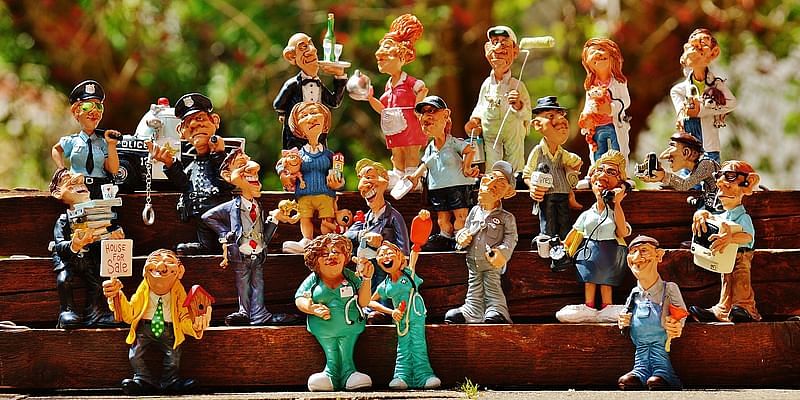 “When we looked into the payments, we realised that it wasn’t as simple because different tasks had different payments. So, we decided to step in, and we took it upon ourselves to ensure payments were being made on time. We simplified processes, and even instated a small penalty on ourselves for delayed payments, just so we could ensure our network of freelancers don’t suffer,” says Annanya.

The platform, since 2016, has executed more than five million tasks, across 400 cities and around 9,000 pincodes. Even though the platform started out to facilitate more white collar jobs, the pandemic led it to also solve employment problems for blue collar workers. Additionally, it connects college students or recent graduates earning less than Rs 25,000 per month with potential employers, and provides work for homemakers, military professionals, and differently-abled people, as well.

Addressing gaps in the informal sector

Technology is perhaps the best tool there is to solve the unemployment crisis looming large, and companies like Awign and Workex are important parts of the puzzle to bridge those gaps.

Others, like Blowhorn – an Uber for mini-trucks and another one of MSDF’s portfolio companies – are developing solutions that directly employ migrant workers to solve specific issues. Organising and consolidating fragmented parts of the informal sector is important because it not only ensures continuous employment, but also provides greater visibility on demand.

Hundreds of small transportation and logistics companies operate and run their own network of mini-trucks. There are also single driver-owned and operated mini-trucks who earn when they get hired by people, either through word of mouth or through ads put up in kirana stores. The problem with those two models is that they always rely on day-to-day gigs – if they don’t land a job on a particular day, they don’t make money. And even if they do land daily jobs, they don’t have clear visibility on where their next pay is going to come from.

Blowhorn solves this problem because it’s an on-demand aggregator, like Uber or Ola. It helps mini-truck drivers on its platform connect with enterprises and businesses that either need help with one-off transportations, or need to hire dedicated vehicles for their supply chain. Having both sides of demand and supply on a single platform ensures there’s always work and there’s always someone to complete that work.

Mithun Srivatsa, CEO & Founder, Blowhorn explains, “We help businesses develop their own supply chain and let them focus on their core operations. On the other hand, we ensure there is work for mini-truck drivers,”

According to MSDF’s Geeta, it is solutions like Blowhorn, Workex and Awign that can help address the lacunae in the informal sector. Entrepreneurs that bridge gaps and enable discoveries are helping push forward the agenda of organising the informal sector. And perhaps the best way to solve unemployment, especially arising due to COVID-19, is by looking for more such sustainable solutions using the power of technology.

PrevPreviousJ&J Halts Covid-19 Vaccine Trial Due to Unexplained Illness
NextFrom the US to India: Building an innovation ecosystem for our Desh with Gururaj Deshpande at TechSparks 2020Next