Retail inflation jumped to 7.34 per cent in September, mainly on account of higher food prices, official data showed on Monday. It's the highest level ... 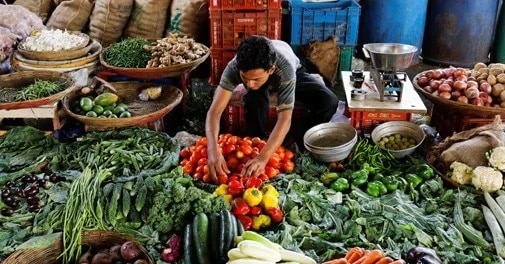 The consumer price index (CPI) based retail inflation was at 6.69 per cent in August, as per data released by the National Statistical Office (NSO).  It was 3.99 per cent in September last year.

The retail inflation, mainly taken into account by the RBI to arrive at its policy decisions, has been above the regulator’s comfort level. The RBI MPC has been given the mandate to maintain annual inflation at 4 per cent until March 31, 2021, with an upper tolerance of 6 per cent and a lower tolerance of 2 per cent.

RBI Governor Shaktianta Das last Friday said retail inflation is expected to remain close to the targeted level by the last quarter of the current fiscal year, however, it is likely to stay above the tolerance level at 6.8 per cent for the quarter ended September 2020.

“Even though the high food inflation will eventually prove to be transient, with the favourable base effect and kharif arrivals to soon initiate a downward trajectory, the average inflation figures for FY2021 as well as H2 FY2021 are likely to be uncomfortably high. Amidst the unpalatable headline and food inflation figures, the relatively stable core inflation over the last three months offers some relief, keeping the hopes of a February 2021 rate cut alive,” said Aditi Nayar, Principal Economist, ICRA.

“India’s Sep CPI has surged to 7.34% from 6.69% in August. The increase in September print is higher than what market expected, Reuters poll suggested a rise of 6.88% as food prices still remain a concern on lingering supply disruption. Unless the inflation doesn’t fall below the higher band of 6%, we don’t expect RBI to cut rates despite Gov Das  stating to ‘look through inflation’. But eventually, as the supply shocks dissipate as the economy continues to unlock, we may see inflation falling back to the tolerance band of 2-4%. The central bank expects CPI to fall in the 2-6% target in the second half of FY21, so we cannot rule out any rate cut this fiscal year,” said Rahul Gupta, Head of Research- Currency, Emkay Global Financial Services.